Both of my baby bassets have to bake two dozen cookies for a cookie swap at school on Friday. Since I had one ounce of energy left, and I didn’t want to waste it, I made them get it done last night. This close to Christmas I never waste a spare minute or ounce of energy. Grab it while you can kids! My youngest made his batch of cookies without incident, so my oldest went to work as soon as my youngest’s cookies came out of the oven. It was his project, so I stayed on the other side of the counter, and only advised him when needed. He was doing great. He had completed his first sheet of cookies, rolling them into neat little balls almost all the same size, and each with a halved cherry squished into the center. Life was good, cookies are easy. Wait! Here comes the life lesson (those usually suck). After another 30 minutes of rolling dough into neat balls and adding cherries, he was finally done with the second tray and they were ready to put in the oven. They didn’t make it to the oven. They made it all over the door of the oven, and on the floor in front of the oven, but not inside. They seemed to be playing an odd game of turtle all over the floor. I could even see red splatters of cherry juice speckled all around the overturned cookie sheet. I think it was in that exact moment, when those cookies hit the floor, that my poor baby basset truly appreciated all the hard work I put into baking for two solid days each year. YAY! Life Lesson in appreciation!! Yes, he cried, and no I don’t blame him. 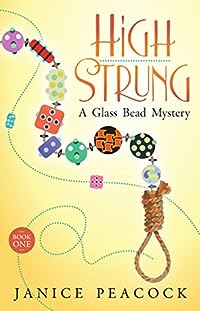 A Humorous Cozy Mystery for Readers Who Love Beads, and Even Those Who Don’t
After inheriting a house in Seattle, Jax O’Connell is living the life of her dreams as a glass beadmaker and jewelry designer. When she gets an offer to display her work during a bead shop’s opening festivities, it’s an opportunity Jax can’t resist — even though the store’s owner is the surliest person Jax has ever met.

The weekend’s events become a tangled mess when a young beadmaker is found dead nearby and several oddball bead enthusiasts are suspects. Jax must string together the clues to clear her friend Tessa’s name — and do it before the killer strikes again. 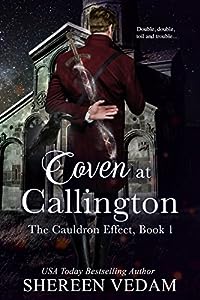 Coven at Callington: The Cauldron Effect, Book 1
by Shereen Vedam

A kidnapped child. A witch on the warpath. A church guard in crisis.

In the year of our Lord 1815, Thomas Drake Saint-Clair, Earl of Braden, a Guard of the Green Cross, is tasked by his archbishop to rescue a missing boy and return him to his warlock father. The order lands Braden in the middle of an unholy war between witches and warlocks and shoves him headlong past a sacred line he’d sworn never to cross.

Newly confirmed Coven Protectress, Merryn Pendraven, rushes to rescue a witch’s son. She’s convinced the same evil warlock who was responsible for her younger brother’s death is behind this kidnapping, too. She has no intention of letting this vile villain get away with the same crime, twice.

When Merryn discovers Braden is also on the case, she’s tempted to join forces. Yet, how can she truly trust him when her aunt has warned that Braden’s second secret charge is to destroy their coven? Finding love in this cauldron of trouble might prove to be Merryn’s deadliest mission and Braden’s complete undoing. 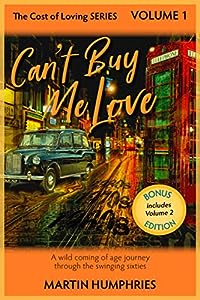 Can’t Buy Me Love: A wild coming of age journey through the swinging sixties. (The Cost of Loving Series Book 1)
by Martin Humphries

Sometimes, a girl’s gotta do what a girl’s gotta do…
It’s the sixties, and London might be swinging, but not for our girl Edith. Raised in a miserable home full of anger and hate, life for poor Edith seems to hold little hope. But she finds plenty when she teams up with her older gay cousin, Ronnie, who makes her his mission with a plan to transform her – just like Cinderella – into the fabulous young woman he knows she deserves to be.

Once free of her abusive father and her weak, defenseless mother, the changes are swift and dramatic as, suddenly, life is an exciting adventure, full of twists and turns. Edith’s coming of age becomes a roller-coaster ride of glorious highs and frightening lows, until her father comes back to haunt her. But will a dazzling – yet thoroughly unconventional – Prince Charming step up to claim her? And, if so, where will it take her and how will it end? Who will win and who will lose?

This ‘Can’t Buy Me Love’ BONUS EDITION offers the first two of six volumes in the ‘The Cost of Loving’ Series. If you like stories of success over adversity, family dramas and sexual diversity, then you will love Martin Humphries’ bitter-sweet voyage of discovery through some of the most exciting years in living memory. Years chock full of changes of every kind, when being gay usually spelled trouble with a capital T.

Start traveling this fascinating journey through the 60’s, 70’s and 80’s today by buying ‘Can’t Buy Me Love’, BONUS EDITION and follow Edith through London, Europe and Hollywood as she matures from troubled teenager to famous beauty. 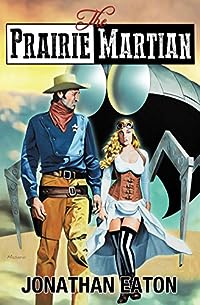 The Prairie Martian
by Jonathan Eaton

New Halchita is surrounded by enemies. The Scavenger Hordes claim the land the town sits on as their own. Giant, mutated ticks await the unwary — one careless step could mean a slow, delightful death wrapped in their sticky palps. And in the skies above, artificially intelligent killing machines look down upon the survivors of the Great Inadvertent War, ready to obliterate any settlement they judge guilty of inappropriate technological advancement.

But Sheriff Frank Westfall’s biggest concern is the beautiful and mysterious stranger in the lockup. “Nancy” claims to be a visitor from Mars, a descendant of an experimental colony abandoned by Earth when the war broke out. When Frank discovers that Nancy is not what she appears to be, his duty is clear — the problem is, he’s never had to kill anything with such a pretty face before. 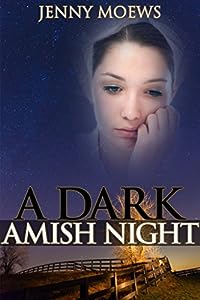 Hannah’s whole world collapses when her husband, Eric, is found dead with her young son inside their buggy nearby., Sheriff Quinn Ramsey searches for a killer in a town full of secrets and lies while he deals with his own dark past. A budding romance threatens to consume and destroy both their lives. Can Quinn find Eric’s killer before Hannah is cast out of the only community she has ever known and save her son before the killer strikes again? Find out in this thrill-ride mystery romance.