“Author Kathy Miner has taken an overly saturated genre and reinvigorated it with a skilled balancing act of realism and the supernatural. The darkness and whole abandonment of morality are laid bare with not even the most likable characters spared…which is where the realism seeps in. All of the usual tropes are cast off as Miner builds a world that, superhuman abilities aside, is likely to be a more accurate representation of moral descent than any I have read before.” -Jamie Michelle for Readers’ Favorite.  Enjoy! 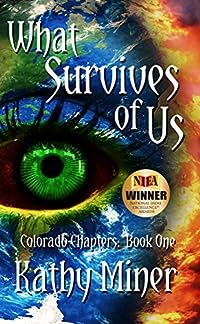 What Survives of Us (Colorado Chapters Book 1)
by Kathy Miner

Naomi sees her first corpse in a Colorado Springs grocery store, but it won’t be her last. With devastating speed, a plague sweeps first the city, then the state, then the world, leaving less than 1% of the population to go on. Naomi, a gentle and sheltered housewife, finds herself fighting for survival in a world populated by desperate people, where might-makes-right, and mercy and compassion are in short supply. Fellow survivors Jack, a youth minister from Woodland Park; Grace, a 17-year-old high school student from Limon; and Naomi’s daughter Piper, a student at the University of Northern Colorado, all find themselves searching for a safe path forward… because it’s not just the world that has changed.

The plague that decimates the human race also pushes mankind into evolutionary change. Those who survive are different, profoundly so, in ways they are just beginning to comprehend. As Naomi struggles to protect and reunite what’s left of her family, she must also learn to understand and accept the changes in herself. In this strange new world, her survival, and the survival of those she loves, depends on it. 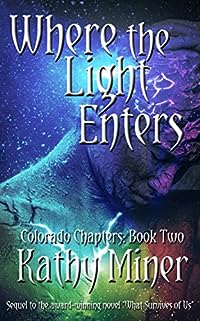 Where the Light Enters (Colorado Chapters Book 2)
by Kathy Miner

Almost a year has passed since a plague wiped out over 99% of the population. In the mountains of Colorado, a group of survivors have made it through their first winter. The world is profoundly changed, and so are the people. Humanity has taken an evolutionary step, and whether the increased intuitive knowing will serve to rebuild or destroy mankind remains to be seen.

Naomi, a housewife in the time before, has spent the winter preparing for a journey she’s terrified of. She knows her daughter is alive and is determined to find her; what she doesn’t know is that Piper has become as dangerous as she is damaged. Jack, formerly a youth pastor, struggles to lead his community through the day-to-day challenges of living, while hiding the dark longings that consume his mind and could destroy his heart. And brilliant young Grace survived the brutal attack she suffered the summer before, but now she’s faced with consequences she can’t think herself out of.

In this sequel to the award-winning “What Survives of Us,” the path is difficult and dangerous, and help isn’t coming from the outside. People must look within, and learn that when it comes to survival, courage and hope are the most vital skills to possess. 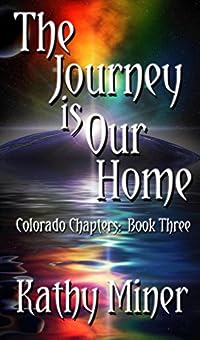 The final installment in the Colorado Chapters trilogy!

Plague has changed the world, and most of the people left alive as well. In Colorado, survivors are learning to adapt to a new way of life. Naomi, a housewife in the time before, struggles to redefine her place in the world, as the Woodland Park community looks to her for leadership. Her daughter, Piper, follows Jack in search of his sister, but neither can leave the past behind completely. And when the violent gang in control of Colorado Springs threatens everything the Woodland Park survivors have been struggling to build, it is brilliant young Grace who has the answers and a plan, and who could end up paying the ultimate price.

In a world where humanity’s evolution has complicated even simple social interactions, underestimating an opponent can have lethal consequences, and understanding yourself can mean the difference between life and death. But in the end, survival isn’t enough. For those who would not just survive, but thrive, the path leads within, and the soul’s journey becomes the place all people call home.