In this Edgar Award finalist by the New York Times-bestselling author of L.A. Confidential, a murder investigation nearly drives a cop to madness. 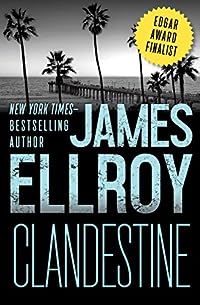 Despite the sunshine, high necklines, and demure purity of its silver-screen goddesses, Los Angeles in the 1950s is not a gentle place. Even as a young cop, Freddy Underhill knows this. Patrolling one of L.A.’s roughest districts, he sees the lust, rage, and madness that permeate the city — and stands in wonder and dismay at it all. He covers the beat with his partner Wacky Walker, a World War II veteran with a Medal of Honor, a drinking problem, and a serious obsession with death. When an old flame of Freddy’s is murdered, the investigation takes them deep into the shadiest part of the city, where Freddy will have to embrace the darkness if he wants to emerge with his life.

From the author of The Black Dahlia, a legendary name in crime fiction called “one of the great American writers of our time” by the Los Angeles Times Book Review, this is a gritty tale of the dark side of postwar America, as well as a riveting mystery filled with “skillful characterization fast-paced action” (Library Journal).