“The Plum Tree is a touching story of heroism and loss, a testament to the strength of the human spirit and the power of love to transcend the most unthinkable circumstances. Deft storytelling and rich characters make this a highly memorable read and a worthy addition to the narratives of the Holocaust and Second World War.” –Pam Jenoff, author of The Ambassador’s Daughter 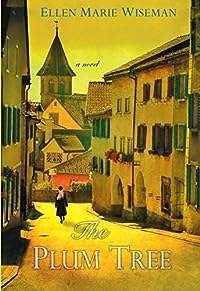 A deeply moving and masterfully written story of human resilience and enduring love, The Plum Tree follows a young German woman through the chaos of World War II and its aftermath.”Bloom where you’re planted,” is the advice Christine Bölz receives from her beloved Oma. But seventeen-year-old domestic Christine knows there is a whole world waiting beyond her small German village. It’s a world she’s begun to glimpse through music, books–and through Isaac Bauerman, the cultured son of the wealthy Jewish family she works for.
Yet the future she and Isaac dream of sharing faces greater challenges than their difference in stations. In the fall of 1938, Germany is changing rapidly under Hitler’s regime. Anti-Jewish posters are everywhere, dissenting talk is silenced, and a new law forbids Christine from returning to her job–and from having any relationship with Isaac. In the months and years that follow, Christine will confront the Gestapo’s wrath and the horrors of Dachau, desperate to be with the man she loves, to survive–and finally, to speak out.
Set against the backdrop of the German homefront, this is an unforgettable novel of courage and resolve, of the inhumanity of war, and the heartbreak and hope left in its wake.