A finalist for the Edgar Award, Birdman explores the darkest reaches of the human mind and introduces a fascinating detective to the world of British crime fiction. 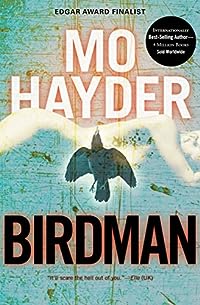 A serial killer stalks the streets of London in this “top-notch debut thriller” — the first Jack Caffery novel from the acclaimed author of Gone (Kirkus Reviews).

In his first case as lead investigator with London’s murder squad, Det. Inspector Jack Caffery is called on to investigate the murder of a young woman whose body has been discovered near the Millennium Dome in Greenwich, southeast London.

Mutilated beyond recognition, the victim is soon joined by four others discovered in the same area — all female and all ritualistically murdered. And when the postmortem examination reveals a gruesome signature connecting the victims, Caffery realizes exactly what he’s dealing with — a dangerous serial killer.