On A Peaceful Morning

The first series, The Charlotte Denver Cozy Mystery Series, is set in the fictional English coastal town of St. Eves, and features marina-front café owner and reluctant amateur sleuth, Charlotte Denver. The series was inspired by the time author Sherri Bryan spent running her own marina-front café. Her second series, The Bliss Bay Village Mystery Series, features thirty-nine year old empty-nester, Megan Fallon. The inspiration for this series came from a train journey. The passengers were mainly women, many of whom were talking about their divorces, their search for new jobs, how they were missing their kids after they’d gone to college, and all the other things that were going on in their lives. It was those conversations that inspired Bryan to create Megan. The setting of Bliss Bay Village, along with and its residents, are loosely based on places she visited, and people she met. All her books are written in British English and contain no graphic profanity, violence or sex. Enjoy! 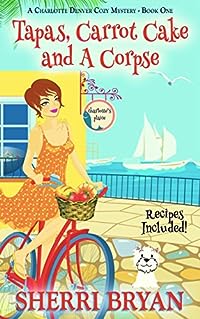 Small-town murder was never so calculated.

On a peaceful morning in the English coastal town of St. Eves, a handsome stranger meets a gruesome end.

That wonderful way of life is threatened, though, following the arrival of strangers to the town. Strangers who are swiftly followed by murder.

Is the killer the wealthy boat owner with the big bank balance and the bad attitude?

Or is it his attractive younger wife, who’s keeping secrets and telling lies?

Or is someone else responsible?

As café-bar owner, Charlotte Denver takes up the challenge to help find the killer before they strike again, she uncovers a shocking plot that rocks the close-knit community to its core, and a twist in the tale that no one saw coming.

There’s a mystery to solve, along with engaging characters, a little romance, and recipes to try for yourself in Tapas, Carrot Cake and a Corpse, the first book in the Charlotte Denver Cozy Mystery Series. 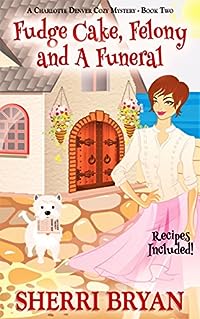 Grief, greed and grudges – the perfect recipe for murder…
The death of a much loved member of the community is the catalyst for another murder in the bustling English coastal town of St. Eves.

When relatives of the deceased arrive in town it’s not long before tempers flare as they become consumed by greed, so intent are they to get their hands on the family fortune.

As hostilities go from bad to worse, Charlotte Denver inherits a new addition to her family and becomes involved in a feud which threatens to rid her beloved town of a long-standing landmark.

When a body is discovered in the car park of a local hotel, Detective Chief Inspector Nathan Costello heads up the murder investigation as Charlotte delves for clues to the identity of the killer, and finds her life in danger as the story twists and turns its way to a dramatic conclusion.

Join Charlotte and the rest of the St. Eves’ residents in this, the second book in the Charlotte Denver Cozy Mystery Series. 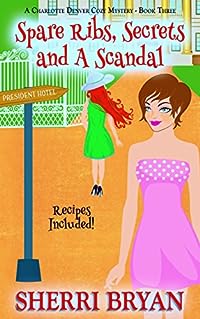 Sometimes it’s the people you think you know best who are keeping the biggest secrets…
Charlotte Denver is preparing to move into her new home. All is well with the world in the English coastal town of St. Eves and life couldn’t be sunnier.

However, when old friends return to the town, tragedy follows close behind and it’s not long before Charlotte finds herself trying to clear her best friend’s name as long-hidden secrets and a scandal from years gone by are revealed.

In a race against time to save a loved one, Charlotte needs every one of her amateur sleuthing skills as the story reaches it shocking climax.

Join her, Nathan, Jess and the rest of the St. Eves’ gang as they return in the third book in the Charlotte Denver Cozy Mystery Series 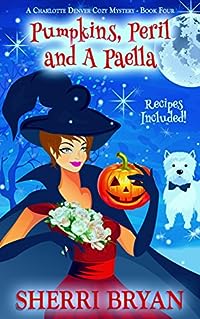 When a ghost from the past resurfaces at Halloween, Charlotte Denver soon realises they will stop at nothing to get what they want…
When a dead body is discovered during the annual St. Eves Halloween fair, it isn’t long before Charlotte finds herself up to her neck in helping to solve yet another murder mystery.

This one, however, proves to be a little too close to home for her liking as she finds herself, and the man she loves, in danger… and what is the secret that fiancé, Nathan Costello, is keeping from her?

With clues to find, a killer to catch and a wedding to arrange, Charlotte has her work cut out for her in this, the fourth book in the Charlotte Denver Cozy Mystery Series. 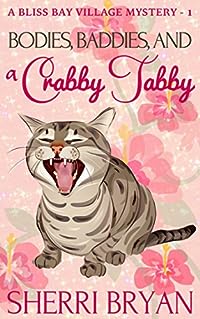 Thirty-nine-year-old Megan Fallon is in a pickle.
Not only is she suffering from empty-nest syndrome, but she’s lost the job she loved, and her fiancé’s run off with her hairdresser.
A complete life change is what’s called for, so when the opportunity to make a new start presents itself following news of a family celebration, Megan is lured back to her childhood home.
With a party to organise, old friends to catch up with, an ex-husband and his jealous wife to avoid, a mischievous uncle on the lookout for adventure, a clumsy childhood acquaintance who has undergone a startling transformation, and a cantankerous tabby cat to contend with, Megan has her hands full.
However, what started off as a leisurely break soon takes a chilling turn when members of the community start getting bumped off at an alarming rate, and Megan finds herself at the heart of an investigation that has her suspecting everyone.
Could the murderer be the local finance advisor, whose misjudged investment recommendation cost his clients their life savings?
Or maybe the village celebrity; a footballer who appears to have at least one skeleton in a cupboard he’d prefer was kept firmly locked?
Or what about a member of a classical music trio who seem to have plenty of secrets they’d rather keep to themselves?
Or is the killer someone else entirely?
As Megan becomes involved in the hunt for a murderer, it’s not long before she finds out that some of the villagers are harbouring other secrets too.