I had it set in my mind that I was going to make something crafty and awesome for my friends and family for Christmas. I started to really stress out about trying to figure out the perfect little thing to make them. Then I found myself filling up my calendar with tons of events and responsibilities and I started getting really stressed out. Then it hit me. I don’t have to make anything. It’s just fine if I do nothing. Suddenly I was mad at myself for putting myself through all that stress. Man!! I just can’t win with myself can I? I started to get a little mad at myself for being so hard on myself.  I thought it was probably a good time to just walk away from myself and let myself cool off, but apparently I just can’t let things go and I followed myself around the house. Things were heating up between me and myself, but the real trouble started when I walked in. 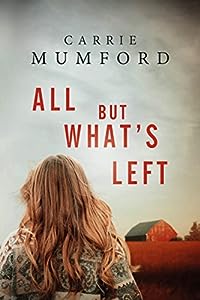 All But What’s Left
by Carrie Mumford

A childhood marred by tragedy. An uncertain future. One summer that changes everything.

After losing her mother in a tragic accident, Hannah Tatum grows up wanting nothing more than to be a good girl. At twenty-one, she has her whole future planned out. She’ll help her dad with their ranch until her childhood sweetheart finishes university. They’ll get married, take over the ranch, and live happily ever after. But since when do perfect plans ever work out?

At the beginning of the summer, Hannah’s father decides to sell the ranch. He hires Will Ludlow, travelling ranch hand and rodeo star, to help get the property ready. Hannah is determined to stop her dad, keep the ranch, and stay far away from Will and his mysterious past.

But, as new memories of her mother surface, Hannah doubts her mother’s death was purely accidental. With summer coming to an end and everything falling apart around her, can Hannah hold on to the things that matter the most?

A coming of age story about family secrets, first loves, and finding a place in the world, All But What’s Left is perfect for fans of Jojo Moyes, Kerry Lonsdale, and Nicholas Sparks – a haunting novel that asks: What do you do when making yourself happy means breaking someone’s heart – maybe even your own?

His First His Second (An Alicia Friend Investigation Book 1)
by A. D. Davies

Now the annoyingly-perky detective finds herself in the grip of a northern British winter, investigating the kidnap-murders of two young women.

When a third is taken, Alicia has less than a week to chip away the secrets of a high-society family, and uncover the killer’s objective.

As Richard’s secret actions hinder the police, the clock is ticking until another innocent person dies, and Alicia will be forced into choices that will impact the rest of her life. 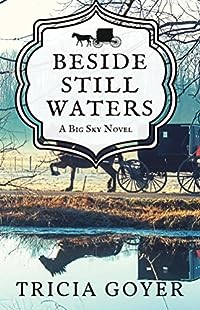 Beside Still Waters: A Big Sky Novel
by Tricia Goyer

Raised among the Amish of Indiana, 18-year-old Marianna Sommer plans to get baptized into the church, marry Aaron Zook, and set up life in the only community she has ever known. But when her older brother chooses the world’s path following his rumschpringe, and a younger sibling begins showing interest in Englisch ways, Marianna’s parents move the family to Montana.
Although she is also in her rumschpringe years and not obligated to move, Marianna makes the journey to dutifully help her mother who is expecting another child. Surprisingly, from strangers on the cross-country train ride to the less rigid stance of the new Montana community, many Englisch influences awaken within Marianna — and even her father — the desire to pursue a deeper kind of joy and love for God.
After an accident, Marianna tells her friend Ben a defining story about the Sommer family, and his response further illumines the active relationship God seeks with His followers. In due time, she learns the move from Indiana was not about losing anything, but finding out who God really is. Despite all the shake-ups, Marianna feels a sweet peace, like still waters, in her soul.

On the planet Fortune, tech is low, tensions high, and heroes unlikely.

Until the day a general of the Colonial Corps arrives with an offer of freedom, and a chance to clear his name.

Gideon doesn’t have to think twice, and with his pet draco Elvis on his shoulder, he takes ‘ship for the city of Nike in search of revenge. And justice. But mostly revenge.

What he finds is a dodger named Mia, a city steeped in corruption, and a menace at the heart of the Colonial Corps which could bring Fortune’s new and fragile peace to an explosive end.

And that’s just his first night in town.

Soldier of Fortune is the first standalone novel in the science-fantasy series, The Fortune Chronicles. If you like down-at-heels heroes, comic banter, and roller-coaster action, you’ll love this genre-mashing thrill ride to the brave new world of Fortune. 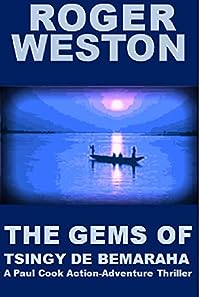 Fans of Clive Cussler, James Rollins and Matthew Reilly check out The Gems of Tsingy de Bemaraha for your next action-adventure thrill ride!

CIA operative Paul Cook was trying to leave his past behind…
Then a desperate and frightened girl travels to Portugal to meet with him, a girl with ties to his past…

She begs Paul Cook to return to Africa to find the man she loves, a man believed to be dead…
He’s reluctant even when she shows him a priceless sapphire as proof that her man is alive,
but then the man on the beach changes all of that…
Now Paul must race from the heart of Africa to the gem-rich island of Madagascar in pursuit of the world’s most ruthless terrorist.

* A suicidal mission
* A girl willing to risk her life to find her fiancé — a man thought to be dead
* It’s Paul’s most daring mission yet
* It takes him into the heart of Africa, where he begins a manhunt
* But soon finds himself on the run.