The Coon Hollow Coven Tales series by Marsha A. Moore features a coven of witches in a fictitious southern Indiana community, south of Bloomington, the neck of the woods where the author spent her favorite childhood years surrounded by the love of a big family. The books are rich with a warm Hoosier down-home feel, and have interesting interactions between coven members and locals from the nearby small town of Bentbone. If magic wasn’t enough of a difference between the two groups, the coven folk adhere to the 1930s lifestyle that existed when the coven formed. ALL THE COON HOLLOW COVEN TALES NOVELS CAN BE READ AS STAND ALONE BOOKS.

Esme Underhill is about to discover a darkness hidden inside her that could destroy her chance for independence and possibly kill her.

Esme’s mother took her young daughter away from Southern Indiana’s Coon Hollow Coven to prevent her from learning about the unusual witchcraft she had inherited. When Esme is twenty-seven, her beloved Grammy Flora passes away and leaves her property in the Hollow to her granddaughter. With this opportunity to remake her life and gain independence, Esme attempts to emulate Grammy Flora as a wildwood mystic who relies on the hedge world of faeries to locate healing herbs. But fae are shrewd traders. When they open their world to her, she must meet the unknown malevolence of her birthright.

Thayne, the handsome king of the fae Winter Court, faces his own struggle to establish autonomy as a new regent. He is swept into the tempest of Esme’s unfolding powers, a dangerous threat to his court. His sworn duty is to protect his people, despite Esme’s beauty and allure, which tear at his resolve.

Both Esme’s and Thayne’s dreams of personal freedom are lost… unless they can trust each other and overcome surmounting dangers. 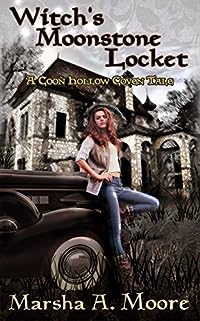 Twenty-three-year-old Jancie Sadler was out of the room when her mother died, and her heart still longs for their lost goodbye. Aching to ease her sorrow, Aunt Starla gives Jancie a diary that changes her entire life. In entries from the 1930s, her great grandmother revealed how she coped with her own painful loss by seeking out a witch from nearby Coon Hollow Coven. The witch wore the griever’s moonstone locket, which allowed whoever could unlock its enchantment to talk with the dead.

Determined to find that locket, Jancie goes to the coven’s annual carnival held in her small southern Indiana town of Bentbone. This opposes her father’s strict rule: stay away from witches. But she’s an adult now and can make her own decisions. She meets Rowe McCoy, the kind and handsome witch who wears the moonstone. He agrees to let her try to open the locket, but they’re opposed by High Priestess Adara and her jealous desire to possess him. Desperate for closure with her mother, Jancie persists and cannot turn away from a perilous path filled with magic, romance, and danger. 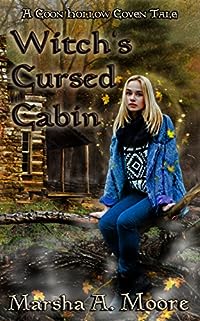 Eager to be on her own away from home, twenty-year-old Aggie Anders accepts a relative’s invitation to live in Coon Hollow Coven. Although she’s a witch from a different coven, what locals say about the Hollow confuses her. How can witchcraft there live and breathe through souls of the dead?

But living in the homestead also brings Aggie enemies. Outsiders aren’t welcome. A cantankerous, old neighbor tries to frighten her off by warning her that the homestead is cursed. Local witches who practice black magic attempt to use their evil to drive Aggie away and rid their coven of her unusual powers as a sun witch.

Determined to stay and fit in, Aggie discovers not only that the cabin is cursed, but she alone is destined to break the curse before moonrise on Samhain. If she fails, neither the living nor the dead will be safe.

A note to readers: the books of this series are written to be read in any order. The series is about one community, and its residents may pass in and out of various books, but each book has its own unique and special story to be told.