I am going to have some fun today! My mission: To build an army of Lego men that will strike hunger for candy into anyone who encounters us. MWAHAHAHA!! 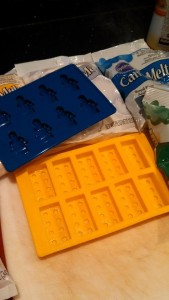 Riot Girls: Seven Free Teen Books With Girls Who Don’t Need A Hero is a collection of Young Adult Speculative Fiction (Fantasy/SciFi/Dystopian/Paranormal) for readers who like it when a girl can take care of herself. These teens don’t sit around waiting for someone to rescue them from their situation, they act!

The collection has something for everyone—dystopian societies, trained assassins, strange creatures (faeries, vampires, werewolves, and zombies), super heroes, and witches. What binds our stories together is our heroines—girls who have the inner and outer strength to take care of themselves.

Included in the collection:

xGeneration 1: You Don’t Know Me – Genre: SciFi / Superhero – Full Length Novel (95,000 words). Fourteen-year-old Janis Graystone is mostly worried about soccer, school, and keeping her older sister from running her life. But when strange things start happening to her including out-of-body experiences and the sense someone is watching her, she finds herself working with an unlikely but loyal ally to discover the source of the danger she senses around her. Rated PG-14 (Language).

The Blemished: Blemished #1 – Genre: SciFi / Dystopian – Full Length Novel (85,000 words). Below average and imperfect in a world of stunning clones, Mina Hart is denied an education and a normal life. But when she meets a new friend’s mysterious brother, she finds herself willing to share a dangerous secret…

Xoe: or Vampires, and Werewolves, and Demons, oh my! – Genre: Paranormal – Full Length Novel (50,000 words). Xoe Meyers liked her normal small-town life. But things change fast when the new guy in town turns out to be a werewolf who goes after her best friend in a big way. Determined to save her friend, she finds herself allied with creatures she never knew existed in a battle that threatens all their lives. Rated PG-13 (Language).

Magic Unbound: Book One in the Fae Unbound Series – Genre: Contemporary Urban Fantasy – Full Length Novel (45,000 words). Not-quite-sixteen year old Lizbet Moore expects a boring last month of summer vacation. What she wasn’t expecting was a fifteen-hundred-year old fae hiding in her back garden. Murderous monks, memories of her past lives, and the race to save the fae from destruction change her summer in ways she could never have imagined.

Avoidables: Book 1 – Genre: Fantasy / Dystopian – Serialized Novella-length Fiction (25,000 words). Hope is an Avoidable in a world that belongs to the Perfects. She was born with only one arm, but when she discovers that her disability is actually a gift, she joins a group of rebels who are determined to change the rules of her society. Rated PG-14 (Language, Mature Situations).

Chronicles of Steel: Raven 1: Episode 1 – Genre: Fantasy / Steampunk – Short Serialized Novelette (17,300 words). Raven was trained by her father to be a Reaper. Just as she’s saved enough lives to redeem the ones she’s taken, she agrees to take on a last mission that’s too important to ignore. Will it force her back into the life she’s trying to escape?

Start with a tough but vulnerable Chicago cop. Add a hyperactive cat, an ailing mother, a jealous boyfriend, a high-maintenance ex-husband, and a partner in the throes of a mid-life crisis.

Stir in a psychopath littering the city with body parts. Mix with equal parts humor and suspense, and enjoy Bloody Mary–the second novel in the funny, frightening world of Lieutenant Jacqueline “Jack” Daniels.

The Skye in June
June Ahern

June MacDonald’s fate is sealed the day she is born when her mother, Cathy, defies her husband Jimmy by giving their new daughter a pagan name instead of a Catholic saint’s, as is their tradition. The decision forever sets the MacDonald family on a course for disaster, and no one can foresee that June will grow up to threaten their strong religious beliefs. After a family tragedy the MacDonald family emigrates from Scotland to San Francisco, California, in the hopes of a new beginning. There, young June begins to have visions. They haunt Cathy, revealing her secret past in the Scottish Highlands. June’s religiously rigid and abusive father will not tolerate the visions.That doesn’t stop June’s feisty nature or curiosity about her psychic abilities and interest in witchcraft. The family is on the brink of imploding when June and her three sisters come of age in the 1960’s Haight Ashbury scene. Their father’s declaration seems to be coming true: “Doomed to hell, every last one of you.” In order to save June,

Jess makes good on his promise to Juan Hernandez to bring in the evil murderous Mexican outlaw called Machete and hand his head over to the Mexican government. His job is tough enough, tracking him through New Mexico Territory, but once he sees the carnage Machete leaves behind, he wants to catch Machete and bring him to justice in the worst way.

His job is hard enough, but he soon learns that Machete has a faithful flock of followers who believe his every word and would take a bullet for him to keep him safe. His job becomes even more complicated when he finds out that Machete’s flock of followers are made up primarily of young men and even a few young women.

Jess has to find a way to finally get to Machete without killing the young men and women in his flock, but they keep getting in his way, forcing him to consider doing some things that almost makes his quite the job of hunting Machete.

The thought, however, of leaving Machete to roam the New Mexico Territory, murdering and butchering innocent women, forces him to continue his hunt for Machete knowing full well that he might have to kill some of his flock, who seem to be brainwashed and have no apprehension about giving their young lives for Machete.

Choose the Perfect Words For Your Unforgettable Wedding Day.

“Do-It-Yourself Wedding Ceremony,” brings the focus back to the real purpose of a wedding … the sacred agreement between two people that defines their marriage.

In step-by-step, informative chapters, Dayna Reid describes the elements of a wedding ceremony from beginning to end, and the choices people can make with each element. “Do-It-Yourself Wedding Ceremony” includes a wealth of wording and ceremony selections, to celebrate diverse styles, beliefs and traditions, from Christian to Zen, to the simple declarations of love that transcend tradition.

Reid, an ordained Officiant with more than a decade of experience discovered “the few ceremony books available were written in either a particular style or from a specific religious view, offering limited variety for customizing a wedding to reflect a couple’s unique and personal perspective and intentions.”

Some key information within the book:

• A large collection of spiritual and non-spiritual wording examples

• A worksheet to help easily compose the ceremony

• Instructions for obtaining a marriage license

• Who can legally perform the ceremony and steps to becoming ordained

• Advice on selecting the right Officiant

• Information on filing the paperwork to make the wedding legal